Chappie was a pretty big project for me (at Weta Workshop obv), one that was a lot of fun and a heckuva lot of work over about 4 years. Here's a few images from the art-of book.
So many of the jobs we work never get art approvals to show our work so I'm grateful to be allowed to share this odd selection, I'll try to fill in the gaps!

The first designs of Chappie himself unfortunately aren't covered in the book. The world's best Greg Broadmore did a bunch of rad concepts right at the start and got it to a pretty well resolved state, after some more notes came through I did a bunch of head designs, Leri did his thang with the graphics and he was kinda done. For a while! This was back in 2010.

We used that design to generate a bunch of images for what Neill Blomkamp called the graphic novel, kinda key-scene story boards to help pitch the film to the studio. A bunch of us in the design room bashed these pieces out real quick and rough, we didn't really expect them to ever see the light of day but of course they were the first concept pieces released. Shame! Here's a few I did, you can see an early version of the scout robot in 'em. Just don't look too close, yearghhh! 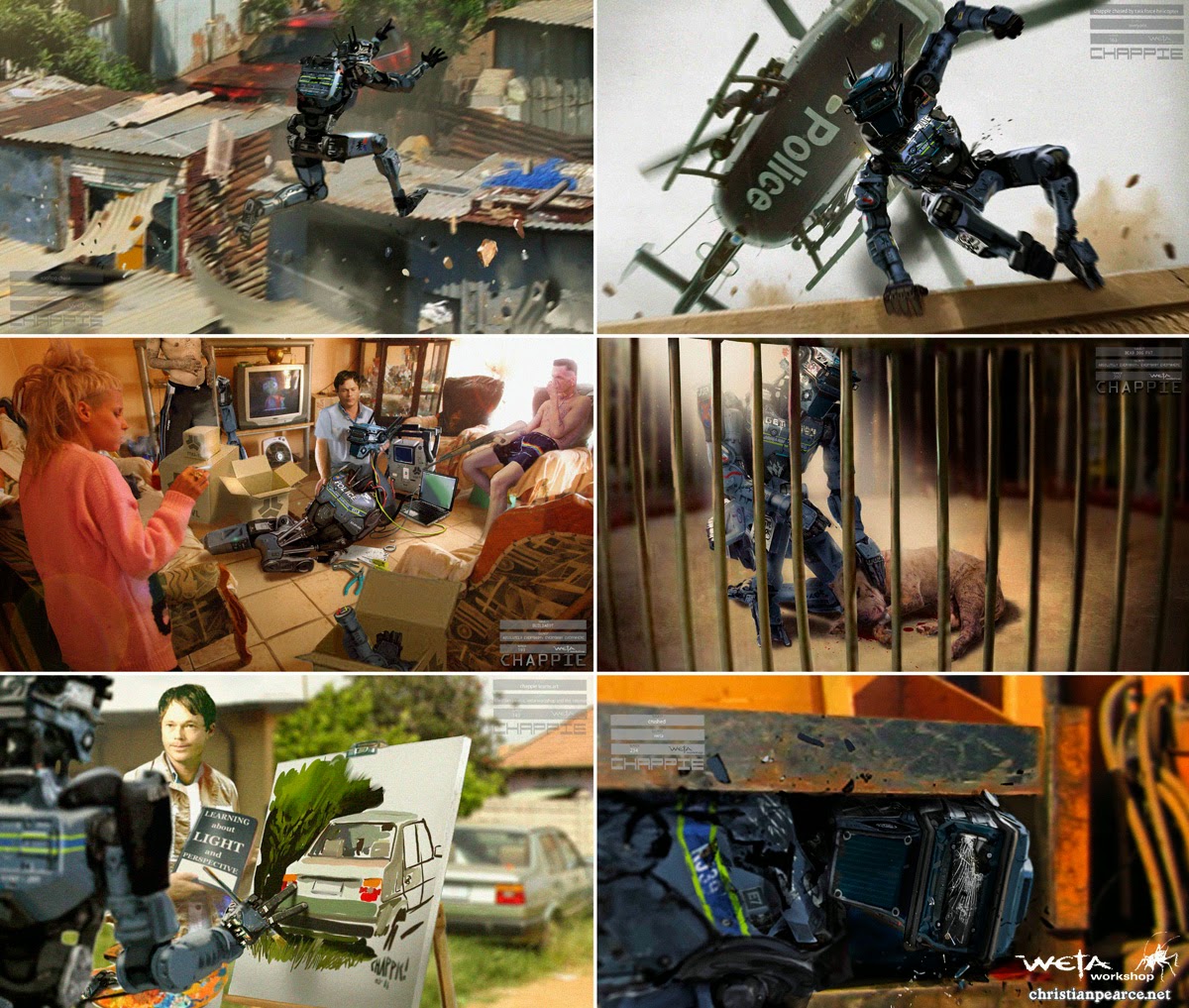 We were working with Neill on Elysium at the same time as the early Chappie stuff and finished that project off before he came back with Chappie developments. He'd had the too talented/nice/hardworking/humble/obese (I'm assuming he is obese) Doug Williams develop the design some more. This became the basis for the next round of designs I worked up and there's still a lot of Doug in the Chappie that ended up on screen. Seriously! He's all over it!
These head sketches were after a few more rounds of notes from Neill, still pretty rough:

I had a crack at some first-round paint schemes, Neill wisely got Leri Greer to do the finals though: 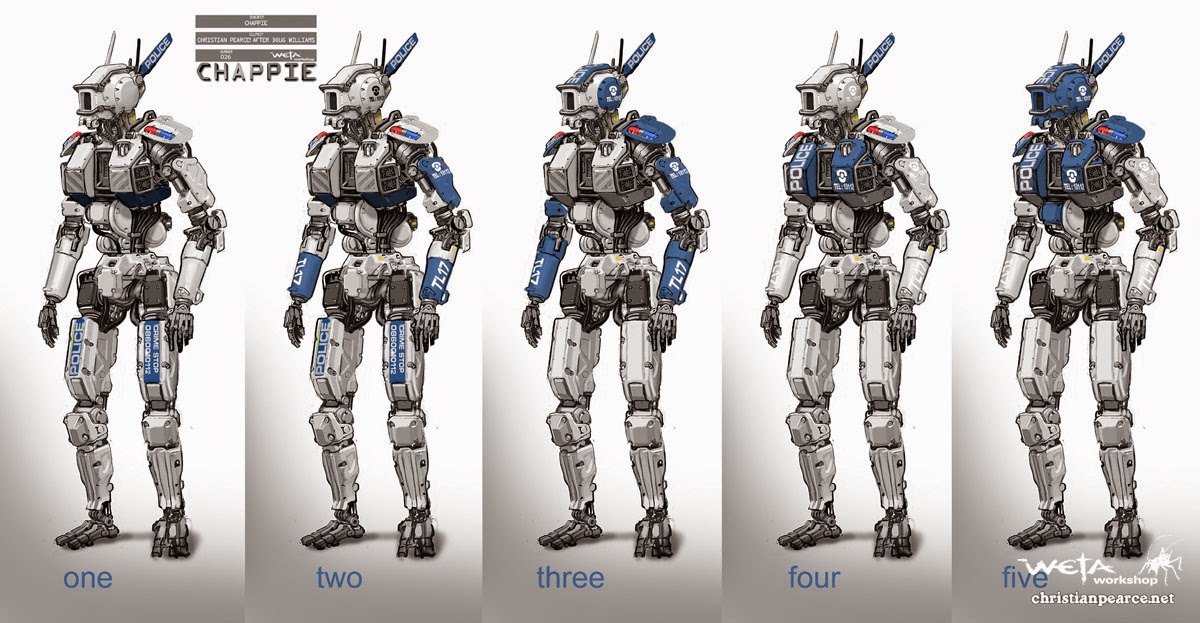 This is pretty much the final design with Leri's masterful graphics and decals helping to hide my wonky rendering. I should say there were a lot of iterations getting to this point! There were dozens and dozens, all pretty incremental though. 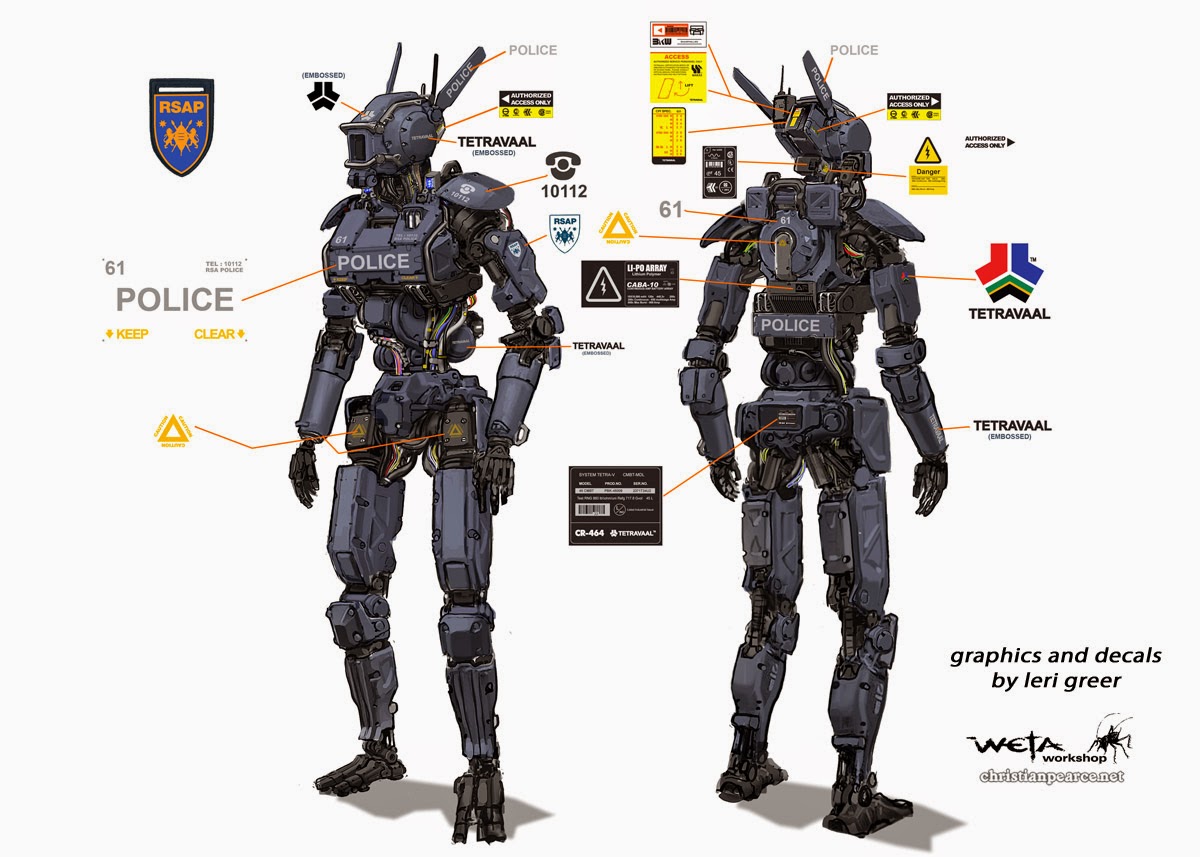 Weta would be building full scale, highly detailed mannequins that were to be used throughout the film. We needed to know how the story events would affect his look so I did a series of damage progression illustrations using the script as reference, here's a couple of them: 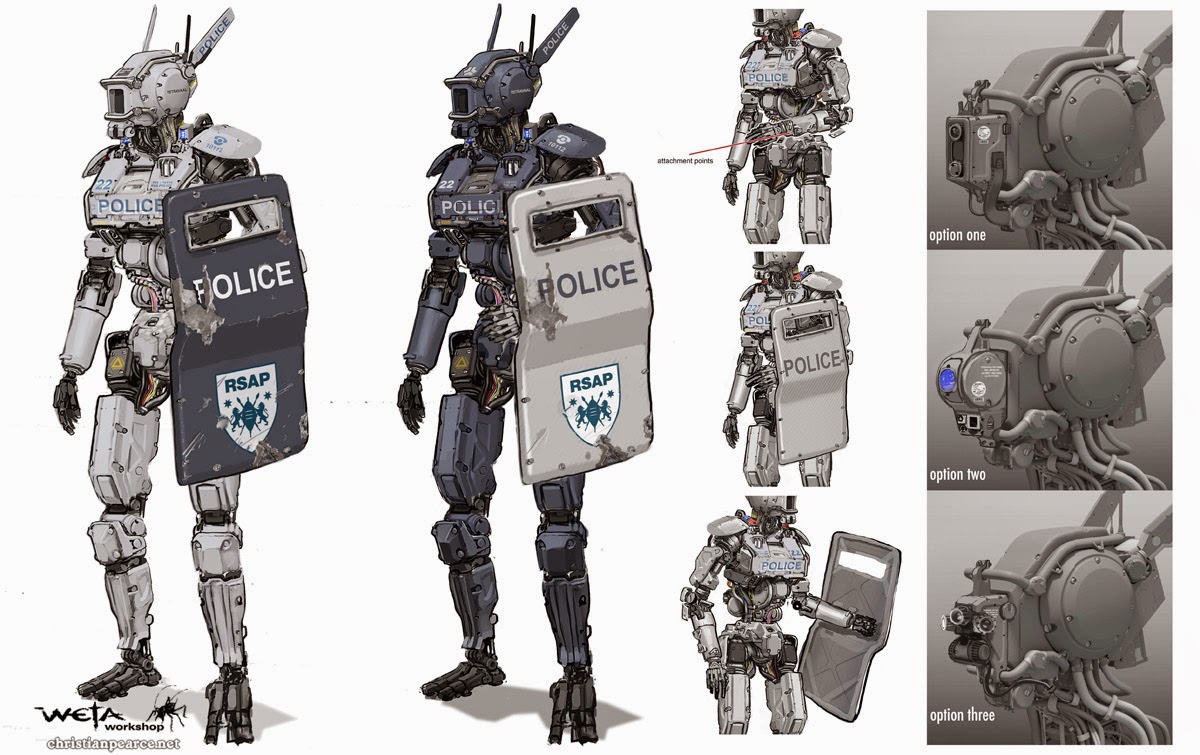 The 2D designs informed the 3D model build, which was handled by the geniuses at Image Engine. Their work was fantastic, they totally nailed his character right from the get-go. It was really rewarding and fun seeing their work progressing every couple of days. There were often tweaks, details or new features that needed to be added so I'd paint onto screengrabs of their work-in-progress models:

These pictures are a very small fraction of the art produced on the film, it'd be cool to go more in depth with some of the details, features and dead-ends at some point if we get more image approvals.

Right at the end when the practical, screen-ready mannequins had been finished and were just about to be crated up and sent to the filming location we got a new note from Neill. He realised he needed a point of eye contact on the robot's face, something that would correlate with where the actors were looking at Sharlto's face and give the audience something to connect with. I did a few visor designs real quick, Neill picked one and the guys here at the workshop built it and sent it attached to the robot the very next day. Crazy fast! I don't have an approved image of that design to show here but here's how he looked it the film: 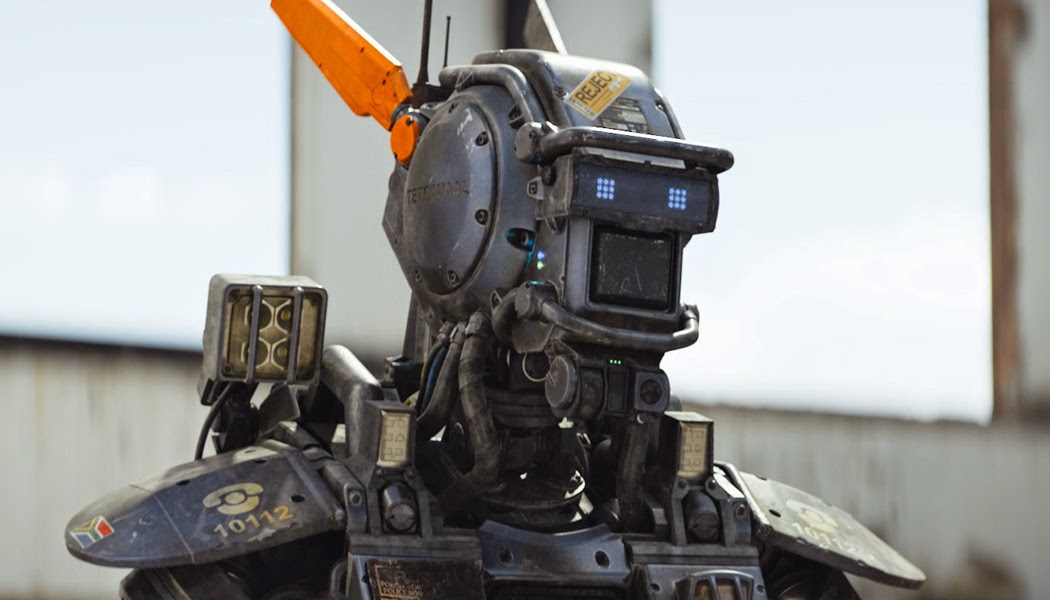 Odd how similar it is to the early designs from way back^^^ looking at it now... huh!