Here's the final drawings of the droids that were done to help inform the build of the practical props here at Weta and for the CG models.

It was a rare opportunity to really think through the construction of a design from the inside out and although I would have liked to have more time it was a fun and challenging process. A real noodle scratcher.

There were a number of full scale, high detail props that were made. Some of them were used in the factory scenes, others were for direct interaction with the actors. The final builds were rad as heck!

Although they were CG effects for the most part the brief was for them to completely cover the live-action actors without the need for digital removal. That meant they had to be quite bulky with large joints to help hide any movement that might break through the model. It made it similar to designing a live-action suit kinda (which these guys were gonna be for a while), 'cept I didn't end up getting the stink-eye from the costume department like usual. Got it from the 3D dept instead! Here's the final basic droid design used in the film, pre-Lerification. Lerification is the process where Leri Greer puts decals and graphics onto something and makes it look 15x better. It's a scientific term. 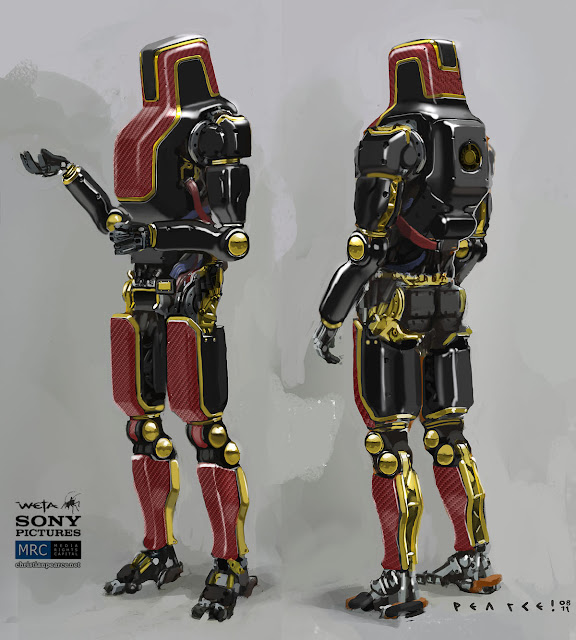 This is the high-end, Lexus-esque version used as attendants by the high rollers up on the Space Frisbee™. Those jerks.
Although these were the designs that actually ended up in the film I was building on a lot of the work others here had produced. There were a lot of droids designed by Leri, Stu, Aaron and Ben that all informed these final ones. Neill, the director, was obviously very involved and these are very much the products of his input
I have a gigantic swollen arse-load of unused designs for these guys and other droids that I'll barf up on here soon.