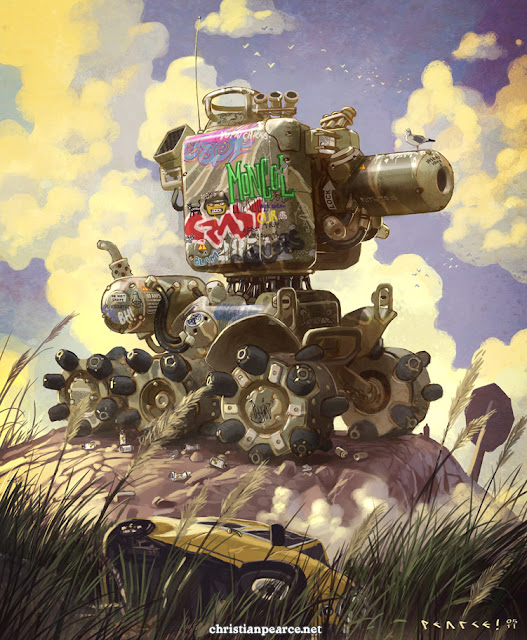 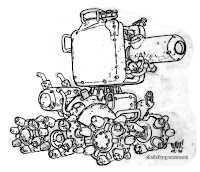 Here's one I started 'ken ages back that I just finished painting about 54 seconds ago. I had this pencil sketch that I started dolloping virtual paint onto now and then, just kinda picking away at it over a few weeks.
The idea was that it was an umanned sentry that would be dropped into disaster areas to ward off looters or any invading forces. It has a real low level AI and a super slow hydrogen extraction system that draws energy from the atmosphere, you pretty much give it enough charge to toddle itself into a tactically sound position and forget about it.
"Unmanned eh? Why the hatch then dickhead?" - maintenance and for the off chance it may need to transport survivors. Yep, it makes heaps of sense. And take it easy with that dickhead stuff will you?
I had it deployed amongst all this rubble, collapsed buildings with a bunch of gruesome stuff going on and had it pretty much finished at the start of the year. Then Christchurch got decimated by quakes followed by Japan and I didn't want to look at it any more. I painted out all that stuff and parked him at the beach in the sun.