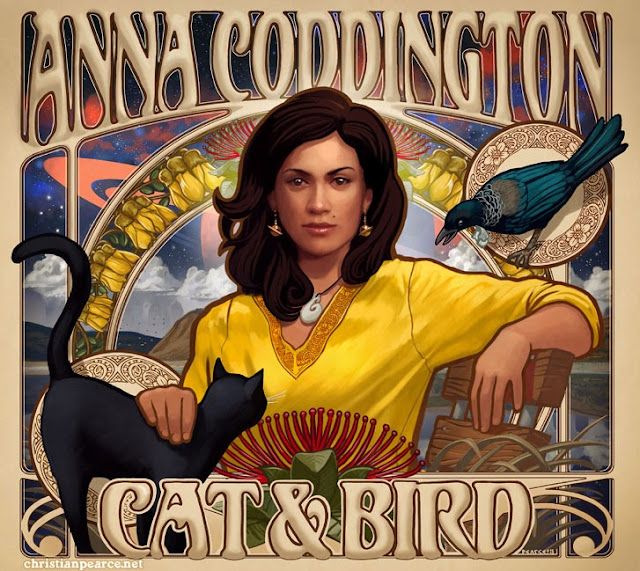 Alohahaha! I told Anna 'ken years ago that if she didn't let me do an album cover for her I was gonna give her a hiding. I guess she took me seriously cos she's mean as at karate now, also she let me do this one.
To start with we went through a bunch of images I put together and agreed that an Alphonse Mucha ripoff inspired piece might be a good starting point.
I wanted to make this painting as Nu Zillund as possible without putting Buzzy Bees/jandals/tomato sauce in it. The view is looking across from Manu Bay near her place in Raglan, a tui is hollerin' at her shoulder and that guy in the bottom left is my idiot cat Lando. The stars are loosely based on our view of the night sky and that bench she's chillin' on is supposed to be like that one you were chillin' on in the weekend eating that pie. You should ease up on those pies by the way.
All the patternwork is based on native plants - kowhai, pohutukawa and putaputaweta. I had a bunch more of that stuff going on for a while but it looked pretty manic.
AC wanted to have some scifi/space elements in there so those weird clouds and ringed planet are ripping off paying a respectful homage to the amazing end image from NZ's own Quiet Earth.
That female humanoid in the middle is meant to resemble Anna Coddington. I traced a photo of her face, so what? I aint trying to do no goddamn likenesses ever again! That was actually pretty challenging for me, painting a recognizable face even though I traced a pic. Fortunately Anna isn't very horrible to look at which made it a bit more bearable.
So that's that! The album's choice, Anna is choice, everything is choice. Wait - earthquakes are not choice.