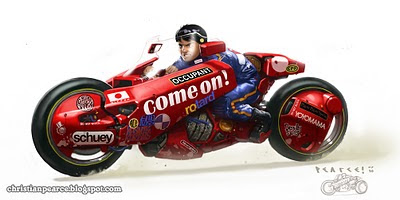 Well, that's as finished as that's gonna get! Didn't really turn out how I'd like but it was a lot of fun to paint. I'd imagined something lightweight looking and kinda less clunky but...eh.
The idea with this bike is that it's two-wheel drive with electric motors mounted within each wheel. The batteries are carried at the bottom of the central monocoque to give a low centre of gravity with a portion of the battery compartment in a quick-release cylinder (in yellow by his knee). I figure it's a stolen race prototype and that part of the battery would be able to be changed very quickly in race conditions, like refueling pit-stops. It would steer with both wheels at low speeds (less than 30km/h) and has huge aerated ceramic discs running around the wheel's circumference for braking. Or something!
I don't think Kaneda's outfit looks better in blue, he was just disappearing into the bike a bit when I painted him in his red get-ups. I also changed his riding position from feet-forward to a more traditional racer-style - not because I think it's cooler, just to try something different.
Anyway! Massif respec' to Katsuhiro Otomo, the absolute motherflippin' man!