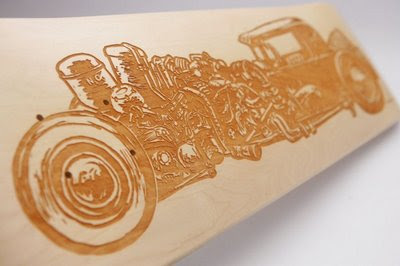 It's a rocket-powered hotrod. It's also on a skateboard! I was totally obsessed with skateboarding for about 10 or 15 years so it's cool to actually have a drawing on one. I always sucked but I was crazy about it! I still roll around now and then but I'm even worse now than I ever was, and that's really saying something. I watched Santa Cruz's "Streets on Fire" again last night, man, what a choice movie! So much great music and Natas' sections in there still rule.
My ol' pal Wojciech has this one and a bunch of other kick-arse boards here. You can even buy this one here if you were so inclined.